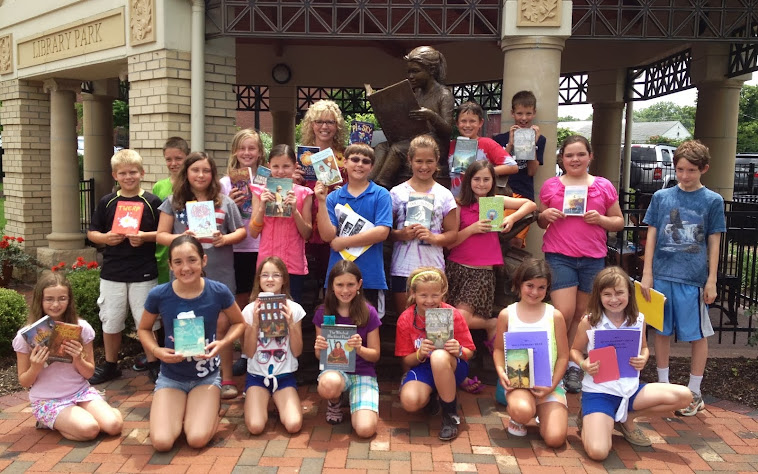 Wow!  We finished Wonder!  Goodbye Auggie.  I don't think I've ever had classes stand up and cheer at the end of a book, but today two classes gave the book a standing ovation!  It's been a really special experience these last weeks sharing Wonder with you all.  I'll never forget it!  I really believe books can change lives, and this is definitely one that changed me.  How has it changed you?  Whose point of view do you wish we had heard from?  Who was your favorite character besides Auggie and why?  Who do you think changed the most and how?  Any last thoughts?

We'll do a few more things with Wonder, so keep checking back.  We'll start our next read aloud soon, so we'll be blogging about that one, too.  The next read aloud is (drumroll please)...... Kinder Than Is Necessary

Some books students picked as their independent books during this unit:

Wow!  These camp chapters are intense!  Auggie's encounter with the 7th graders is really scary.  What a surprise that Amos, Miles, and Henry showed up to help Auggie and Jack!  What are some of your predictions about what will happen when they all get back to school?  Will everything go back to normal?  How will Julian react when he find out what happened?  What will Amos, Miles, and Henry do when they get back?  Do have connections with the overnight camp story?  Have you ever been to an overnight camp?  What was it like?  How do your experiences help you understand Auggie better?
Posted by Holly Mueller at 1:04 PM 1 comment:

Each class's 40 Book Invitation total (we count 100 pages as a book, but students have to complete the book to count it as more than one book):

You all are doing an amazing job reading lots of books!  I'm so proud of you!  There are so many AWESOME books for kids out there, so I'm so glad you're discovering them.  I love reading through your First Quarter Reflection papers, too, to see how you've grown as readers.  Keep up the good work!


Posted by Holly Mueller at 8:50 PM No comments:


Because of an evacuation of one of our schools Friday, I couldn't take a picture of one of my classes - interesting day!! So instead of Fantastic Friday, I'm renaming it Marvelous Monday.

Abbi is reading The Candymakers. I told her Wendy Mass is coming out with a new book, and the cover is illustrated by the same illustrator. Unfortunately, we have to wait until June 2013 until it comes out.

Jenna is reading The Maze of Bones.

Alec is reading The Lost Hero.

Carter is reading The Prisoner of Azkaban.

Here are some Spin Cam captures of my other readers:

Thanks to David Etkin for Spin Cam inspiration and giving me the idea to post what my classes are reading each week!

Posted by Holly Mueller at 7:50 PM No comments:

This was an emotional week reading Wonder!  We all felt the pain that Auggie and his family felt when Daisy died.  Rarely do I cry while reading aloud - I can usually disconnect enough to read sad stories without getting really emotional, but not with "Goodbye."   Lots of you joined me in crying, too!  There's just something about a beloved pet passing on that is so sad.  Auggie will especially miss Daisy because she loved him unconditionally.  I think that's why we love pets so much.  They don't care what we look like or even the way we act sometimes.  We can have a bad day, walk in the back door, and be greeted like we're heroes!  We made strong connections with those chapters.  It wasn't just a mini-lesson on text to self connections, we actually lived it!  It didn't take long until we were laughing again, though, with Auggie's mom's over-emotional reaction to Via's performance in the play.  I love how R.J. Palacio can have us crying one minute and laughing the next!

Everyone seemed happy that Miranda was a narrator.  It's so interesting how quickly we understood Miranda and didn't view her as a "villain" anymore (A villian is just a character whose story hasn't been told).  In one class we compared her to Jack.

What are your thoughts at this place in the book?  Who would you still like to hear from?  What do you think is coming up in the story?  There's still a lot to find out!

I LOVE the sentence about everyone deserving a standing ovation at least once in his/her life.  Take a look at these videos from classes who read about a boy similar to Auggie and when they heard it was his birthday, gave him a special gift.

http://animoto.com/play/SVBSNhd9wVUyhNKngROzYQ
Posted by Holly Mueller at 11:20 PM No comments:

We're reading lots of books in Mrs. Mueller's room!  Today we took a break from the work we were doing to silent read.  Thanks, Tyler, and Tyler's mom, for bringing sugar cookies to help us relax - they were delicious!

Paige C. finished Husky With a Heart  and Squirrels in the School by Ben M. Baglio

Adam finished It Came From Beneath the Bed by James Howe

Alec is reading Wrinkle in Time by Madeleine L'Engle

Abbi is reading The Candymakers by Wendy Mass

Carter is reading The Chambers of Secrets by J.K. Rowling


Wonderful post today by R.J. Palacio about Auggie's birthday and her amazement about how she never expected her simple book to become such a phenomenon. Read her blog post here:
http://rjpalacio.tumblr.com/
Our sentence collections were due today, and I wanted to share some of them from the group at SLE who read Out of My Mind by Sharon Draper. I'll share more from other groups in subsequent posts. I was really proud of you all and the extended thinking you did while reading the book and then reflecting back on it. 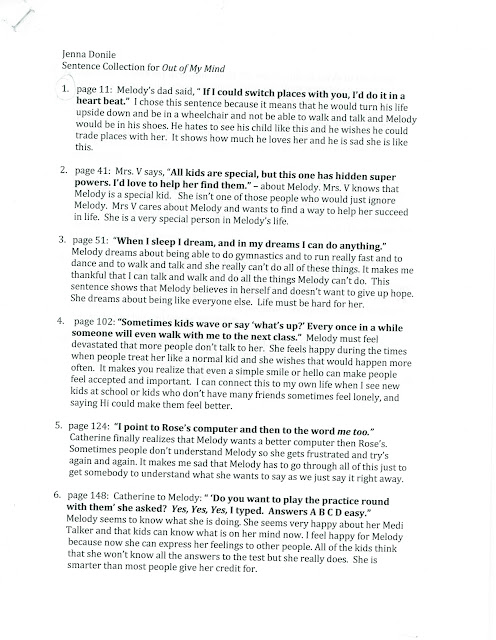 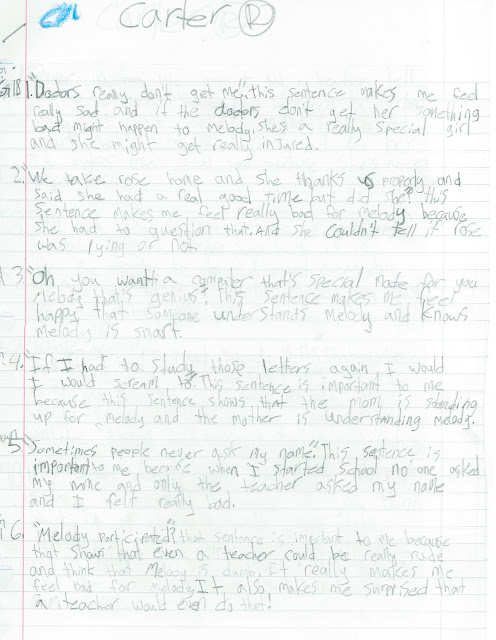 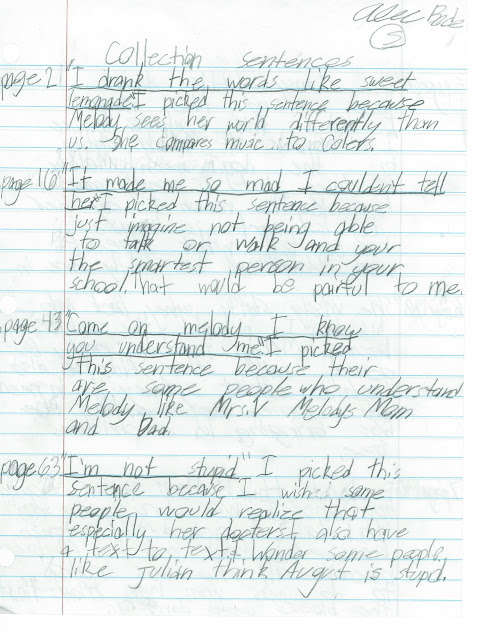 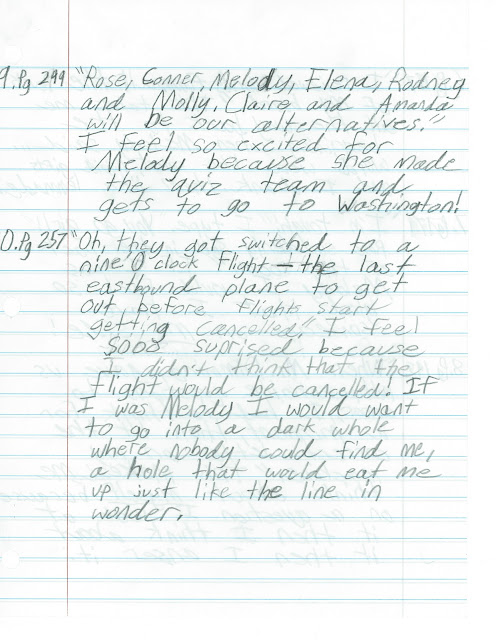 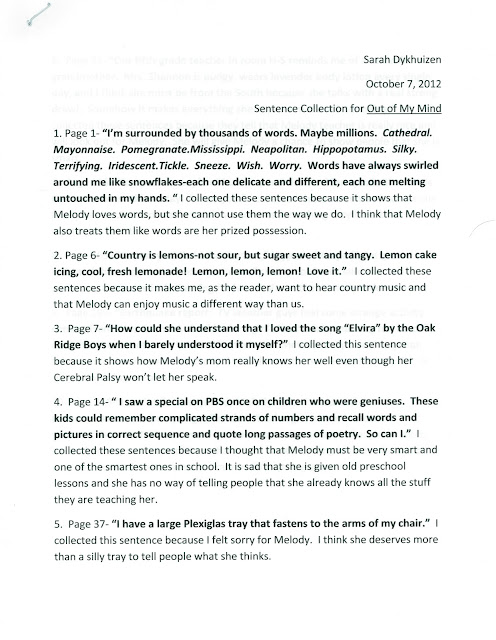 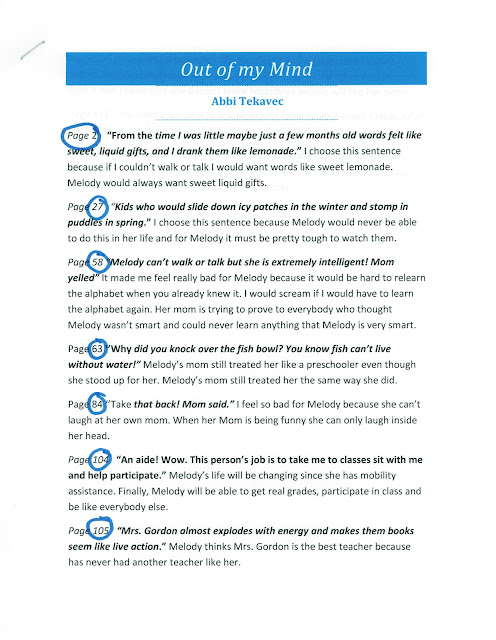 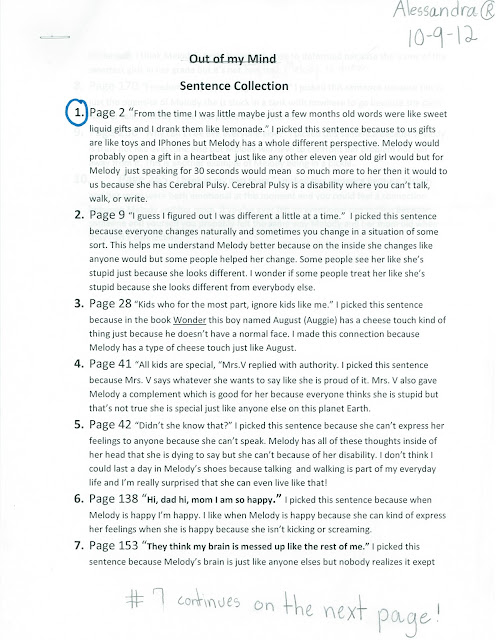 Jack Will is going through a lot.  He's one of the more complicated characters in the story!  He seems to be trying to figure out who he is and where he stands.  Emma was the first one to say something about Jack's comment that he never would have said the things he did on Halloween if "Boba Fett" would have been in the room instead of "Bleeding Scream."  That clearly bothered Emma.  She said that shouldn't matter anyway.  He shouldn't have said those things either way.  I wondered if any of you thought about that.

I wonder if any of you have ever gone through the conflicts Jack has.  He seems to want to do the right thing, but isn't really sure what to do or whose side he's on.  He seems disappointed in himself and is trying to make it right.  Do you have any connections with that?

What should Auggie do?  Should he forgive Jack Will?  Why or why not?

Later in Jack's chapter, someone said Jack seems to be feeling a little of what Auggie has felt.  He's starting to understand what it's like to be alone and rejected.  Maybe that will help him learn true empathy.  Can you think of a time that you experienced something that made you more empathetic?

Lauren Donovan‏@laurencdonovan
@MuellerHolly Love it - thx! You're listed today at http://choosekind.tumblr.com/  & I pinned your pic of class precepts to @randomhousekids Pinterest

That tweet was in response to a blog post I wrote about what we're doing with Wonder on a WONDERblog Tour that Random House is doing in collaboration with another teacher, David Etkin, who started #WONDERschools.  We got lots of feedback about our classroom blog and the precept door at JFB!

SLE and KME - make sure you give me your precepts so we can make a wall or door of YOUR precepts!!
Posted by Holly Mueller at 10:30 PM 4 comments:

We're all on Jack Will's part.  Jack is a hard one to figure out!  What is the real truth about him?  Is he really Auggie's friend?  What are you inferring about Jack?   Why did he say what he did to Julian when he didn't realize Auggie was listening?  How would you compare and contrast Summer and Jack? 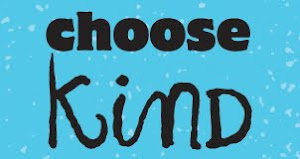